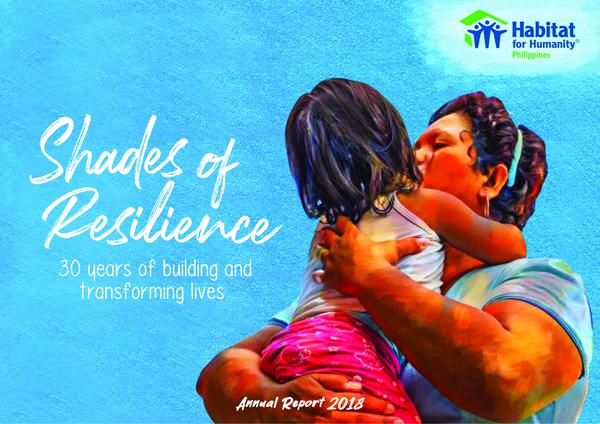 Habitat for Humanity Philippines • 31st May 2019

Shades of Resilience tells of Habitat for Humanity Philippines' 30 colorful years of providing safe, sustainable, and decent shelter to families and communities. Much like the story of the Filipino people, Habitat Philippines' history is a story of hope, strength, and resilience. 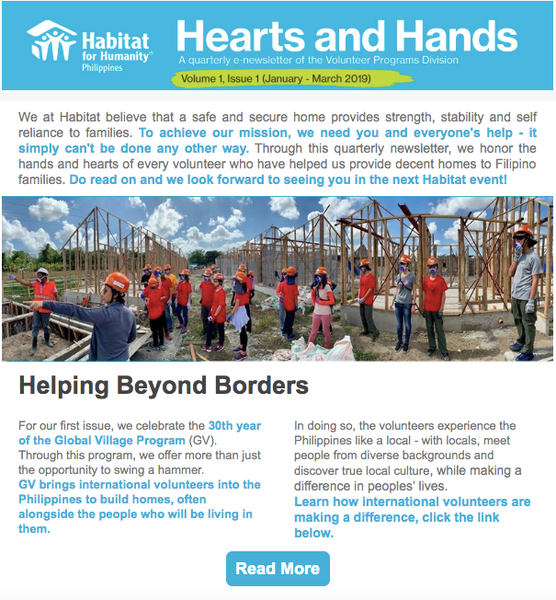 Habitat for Humanity Philippines • 27th May 2019

We at Habitat believe that a safe and secure home provides strength, stability and self reliance to families. To achieve our mission, we need you and everyone's help - it simply can't be done any other way. Through this quarterly newsletter, we honor the hands and hearts of every volunteer who have helped us provide decent homes to Filipino families. Do read on and we look forward to seeing you in the next Habitat event! For our first issue, we celebrate the (GV). Through this program, we offer 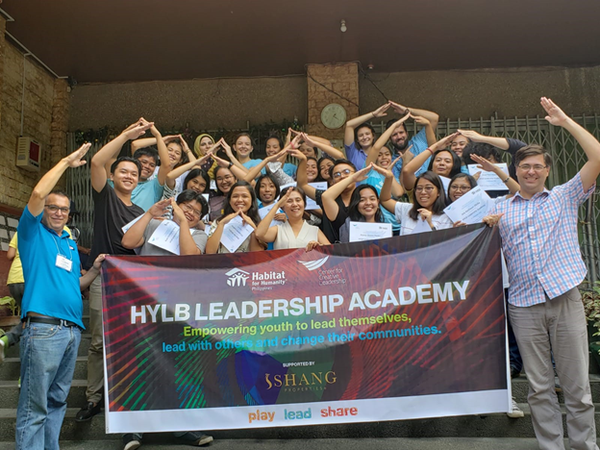 Habitat for Humanity Philippines—one of the leading nonprofit shelter organizations in the country, and U.S. Peace Corps – a global humanitarian and development agency of the United States government, partner to train 6,000 youth in 2019 under the Habitat Young Leaders Build Leadership Academy. Habitat in partnership with the Center for Creative Leadership, developed the Academy to equip young people in Asia Pacific to create and lead programs that address problems in their communities. “As an 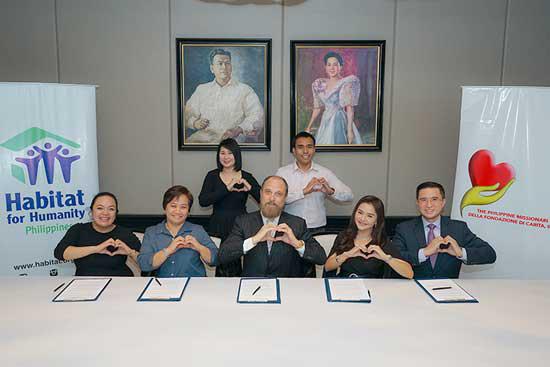 The Philippine Missionari Della Fondazione Di Carita Inc. or Philmissionari and Habitat for Humanity Philippines have partnered to mount a major fundraising initiative this year. The two non-profit organizations recently signed a memorandum of agreement (MOA) for a joint endeavor which aims to raise funds for programs that aid selec 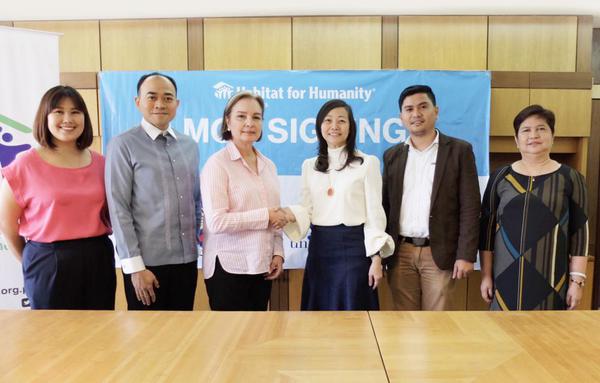 CEBU CITY, Philippines – Habitat for Humanity Philippines and the University of Cebu (UC) formalized their P5-million partnership through a signing ceremony on February 8, 2019. Margarita Moran-Floirendo, board member and ambassador of Habitat for Humanity Philippines, said “the youth is one of the leading voices in supporting our advocacy. We are grateful that (the) University of Cebu is one with us in furthering our vision of a world where everyone has a decent place to live.” “Through this 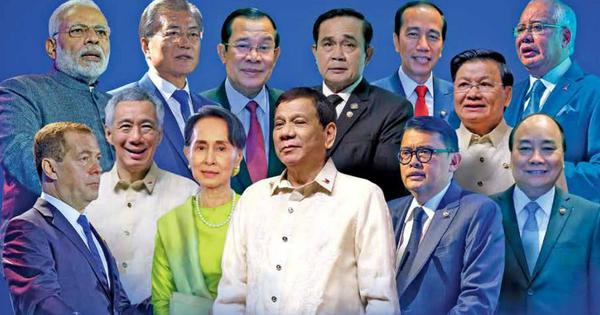 The Philippines is fortunate to have hosted a milestone year for ASEAN as it celebrated its 50th anniversary. Behind these events are some people who have led the development of various programs. With the combined efforts of the government and business council, the Philippines has staged successful engagements, which have shown not only Filipino hospitality, but also the mission to partner with our ASEAN counterparts to create positive change around the world. 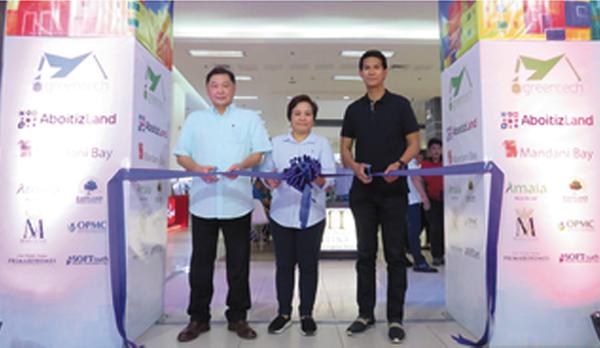 Mandaue City—Habitat for Humanity Philippines recently kicked off its first-ever real estate fair at the Pacific Mall Mandaue here. “Ang Real Estate Fair na May Puso (With a Heart)” stays true to Habitat’s mandate that everyone deserves a decent place to live. A portion of the rental fees from Cebu’s top real estate developers will be donated to fund Habitat Philippines projects. 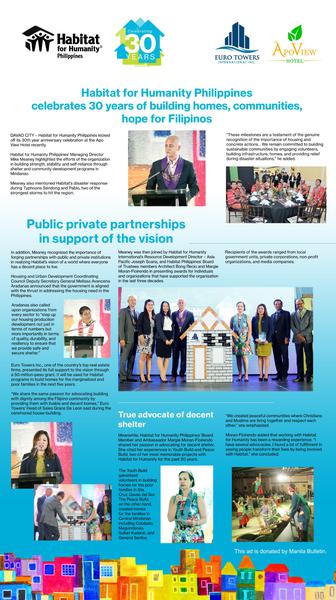 DAVAO CITY – Habitat for Humanity Philippines kicked off its 30th year anniversary celebration at the Apo View Hotel recently. Habitat for Humanity Philippines’ Managing Director Mike Meaney highlighted the efforts of the organization in building strength, stability, and self-reliance through shelter and community development programs in Mindanao. Meaney also mentioned Habitat’s disaster response during Typhoons Sendong and Pablo, two of the strongest storms to hit the region. “These milestones are a testament of the genuine recognition of the importance of housing and concrete actions… We remain committed to building sustainable communities by engaging volunteers, building infrastructure, homes, and providing relief during disaster situations,” he added. Public-private partnerships in support of the vision In addition, Meaney recognized the importance of forging partnerships with public and private institutions in realizing Habitat’s vision of a world where everyone has a decent place to live. Housing and Urban Development Coordinating Council Deputy Secretary General Melissa Avancena Aradanas announced that the government is aligned with the thrust in addressing the housing need in the Philippines. Aradanas also called upon organizations from every sector to “step up our housing production development not just in terms of numbers but more importantly in terms of quality, durability, and resiliency to ensure that we provide safe and secure shelter.” Euro Towers Inc., one of the country’s top real estate firms, presented its full support to the vision through a 50-million-peso grant. It will be used for Habitat programs to build homes for the marginalized and poor families in the next five years. “We share the same passion for advocating building with dignity among the Filipino community by providing them with livable and decent homes,” Euro Towers’ Head of Sales Grace De Leon said during the ceremonial house-building. Meaney was then joined by Habitat for Humanity International’s Resource Development Director – Asia Pacific Joseph Scaria, and Habitat Philippines’ Board of Trustees members Architect Bong Recio and Margie Moran-Floirendo in presenting awards for individuals and organizations that have supported the organization in the last three decades. Recipients of the awards ranged from local government units, private corporations, non-profit organizations, and media companies. True advocate of decent shelter Meanwhile, Habitat for Humanity Philippines’ Board Member and Ambassador Margie Moran-Floirendo shared her passion in advocating for decent shelter. She cited her experiences in Youth Build and Peace Build, two of her most memorable projects with Habitat for Humanity for the past 20 years. The Youth Build galvanized volunteers in building homes for the poor families in Sta. Cruz, Davao del Sur. The Peace Build, on the other hand, created homes for the families in Central Mindanao including Cotabato, Maguindanao, Sultan Kudarat, and General Santos. “We created peaceful communities where Christians and Muslims are living together and respect each other,” she emphasized. Moran-Floirendo added that working with Habitat for Humanity has been a rewarding experience. “I have several advocacies. I found a lot of fulfillment in seeing people transform their lives by being involved with Habitat,” she concluded.

Terwilliger Center for Innovation in Shelter | Habitat for Humanity Philippines

Habitat for Humanity’s Terwilliger Center for Innovation in Shelter invites organizations from the construction industry, media platforms, innovative engineering or architecture influencers and the labor training ecosystem to influence the construction practices of laborers and homebuilders to build safer, more durable disaster-resilient housing. The Terwilliger Center is focused on developing innovative solutions that lead to better housing for the low-income segment. Construction labor pract 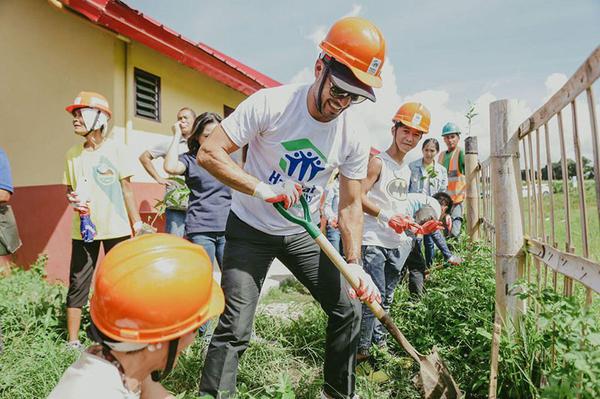 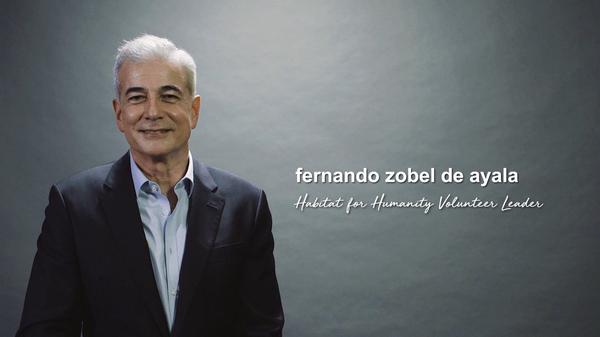 The 30-year history of Habitat for Humanity Philippines is much like the story of the Filipino — it is a story of resilience. Resilience is the constant journey of building and rebuilding. It is remaining strong and growing amidst challenges and adversity. That’s why on our 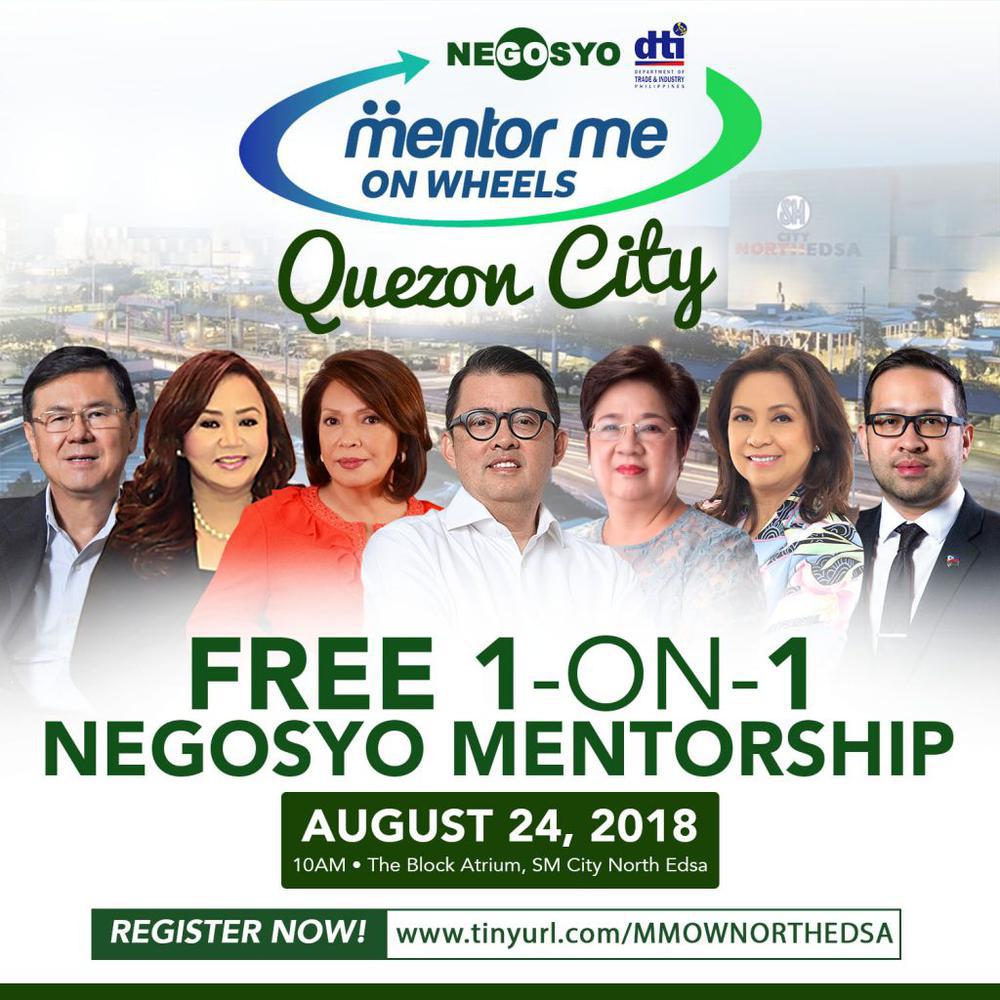 Go Negosyo’s Mentor Me on Wheels now heading to Quezon City! This August 24, 2018, Mentor Me on Wheels (MMOW) will now head north at The Block Atrium, Quezon City. The joint initiative of Go Negosyo and the Department of Trade and Industry aims to bring mentorship closer to all Filipinos. After the successful legs in Metro Manila, Laguna, Batangas, Pampanga, Davao, and Albay, MMOW will make its seventh pit stop at the City of Stars. Presidential Adviser for Entrepreneurship and Go Negosyo 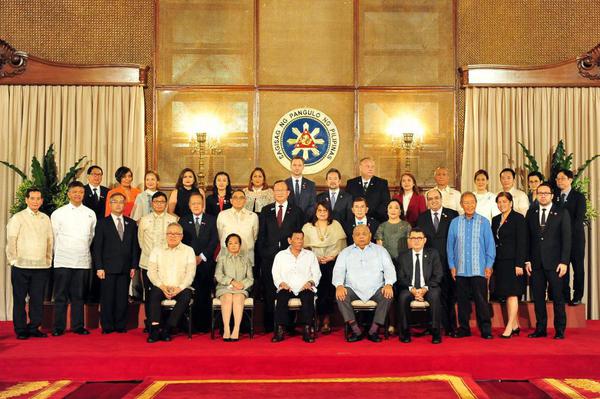 Leaders in business allied to contribute to Pilipinas, Angat Lahat! The Office of the Presidential Adviser for Entrepreneurship launched the Pilipinas Angat Lahat Alliance last August 14, 2018, at the Rizal Hall in Malacañan Palace. This formal alliance is an initiative to integrate and accelerate all government and private sector programs and initiatives geared towards poverty alleviation and job generation through micro, small, and medium enterprise (MSME) development. Led by the Presidentia 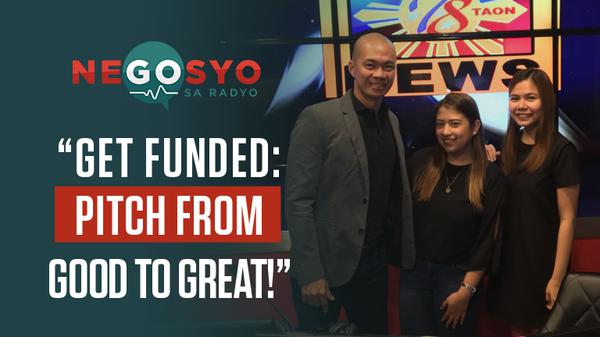 Get funded: Pitch from good to great! | GoNegosyo

Get funded: Pitch from good to great! On August 8, 2018, Go Negosyo sa Radyo guest host Faith Salaver was joined by The Final Pitch creator and host John Aguilar and finalist Eunice Anne San Miguel to discuss everything there is to know about the show. The Final Pitch is a business reality show where small entrepreneurs pitch their business ideas to a panel of investors. The first of its kind in the Philippines, the show provides start-ups with the access to financial assistance from funders. 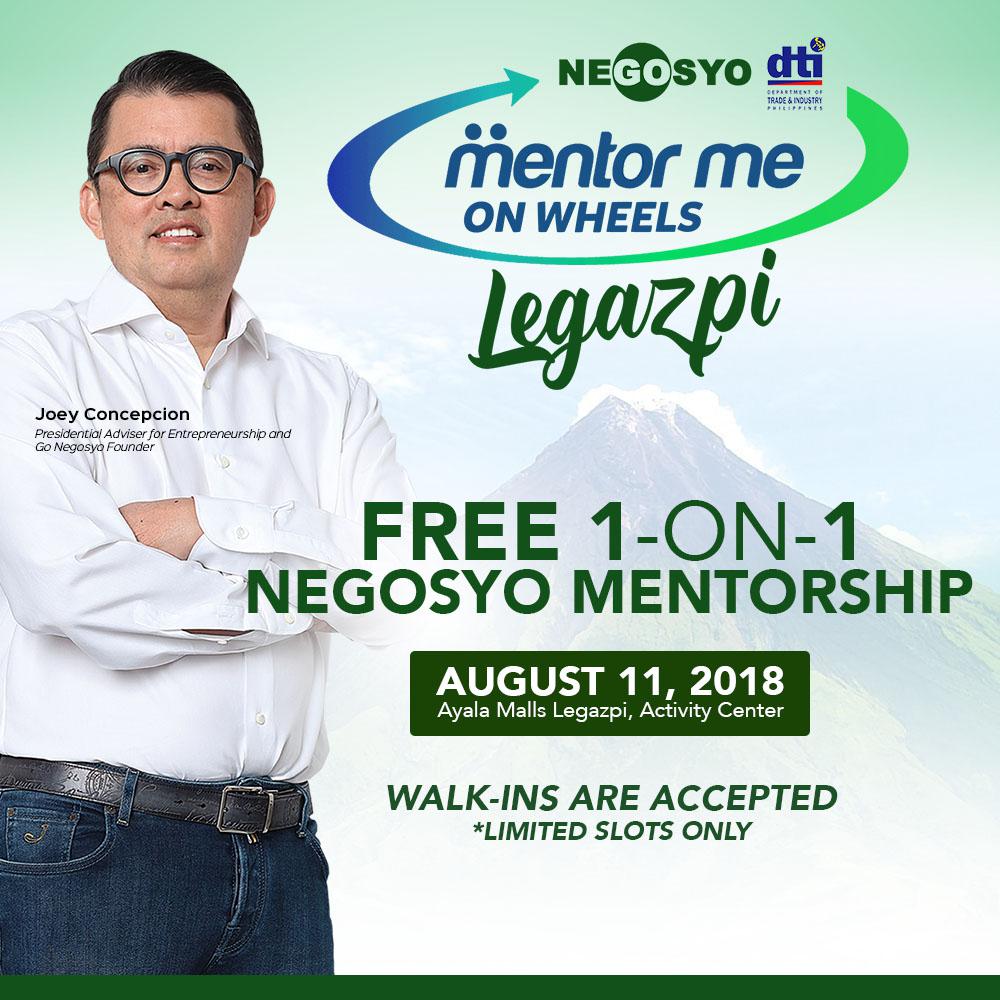 Mentor Me on Wheels’ next stop: Legazpi City! | GoNegosyo

Mentor Me on Wheels’ next stop: Legazpi City! This August 11, 2018, Go Negosyo’s Mentor Me on Wheels (MMOW) will arrive at Ayala Malls Legazpi – Activity Center, Albay. Alongside the Ibalong Festival MSME Expo 2018, organized by PBN Broadcasting Network Inc. and Legazpi City Mayor’s Office, MMOW will be launched at its sixth stop in the Bicol region. The joint initiative of Go Negosyo and the Department of Trade and Industry aims to introduce mentorship to aspiring entrepreneurs through a f 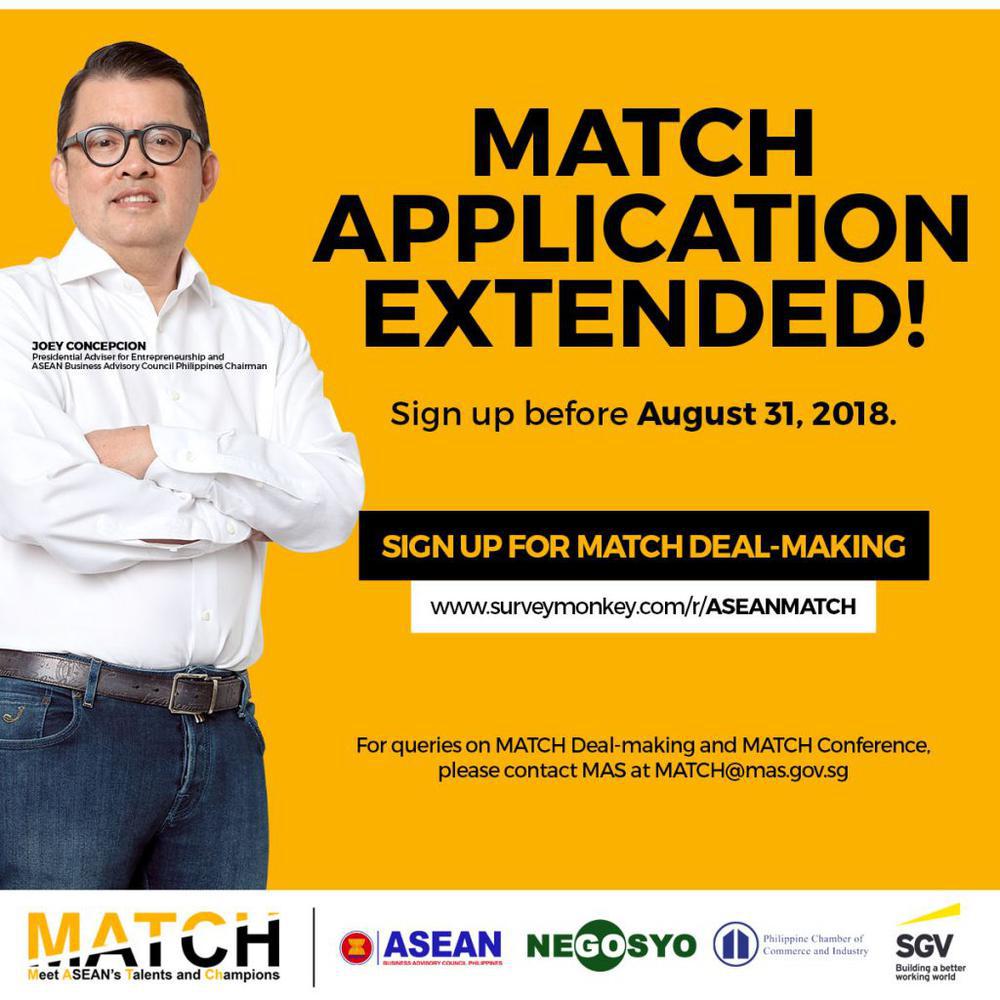 Starting a business is not an easy undertaking. Many businesses, especially startups, have the most innovative ideas only to be hindered by their lack of capital. Small enterprises struggle with finding the right institutions that will provide financial aid in order for their business to be established. These concerns were raised during the successful run of the Meet ASEAN’s Talents and Champions (MATCH) Philippines Roadshow last July 9 and 10 in Makati City and Cebu City, respectively, organiz
ASEAN Agri Summit • 7th August 2018 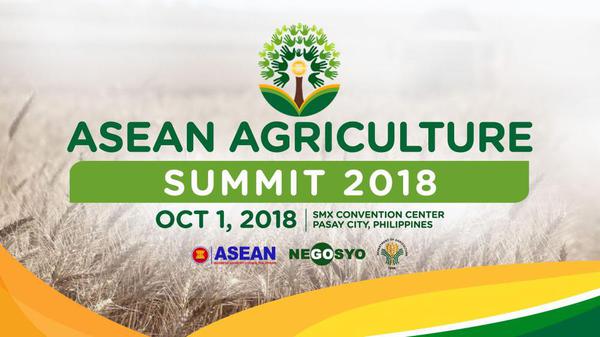 The ASEAN Business Advisory Council (ASEAN BAC) Philippines, together with Go Negosyo and the Department of Agriculture (DA) Philippines, will once again hold the second ASEAN Agriculture Summit on October 1, 2018, at SMX Convention Center, Pasay City. With the theme “Champions and Emerging Icons of Inclusive Business, Technology, and Innovation in Agriculture,” the summit aims to inspire and empower stakeholders in the industry by recognizing those who have greatly contributed to the advanc 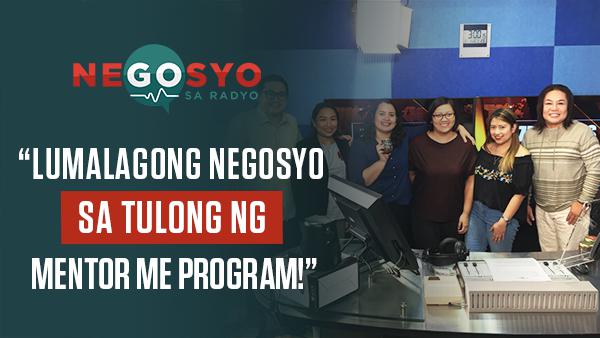 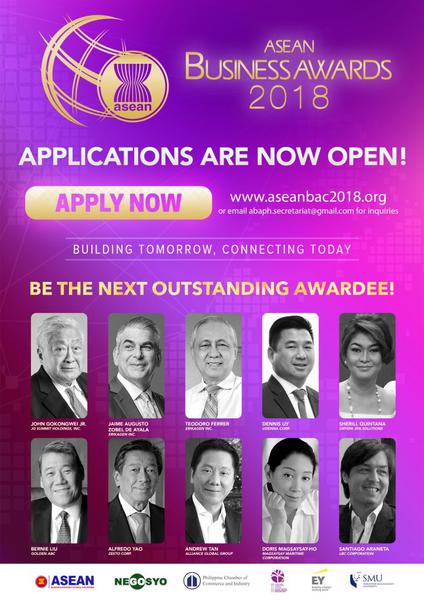